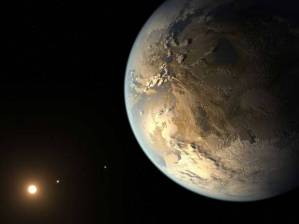 here are moments in the history of humanity when discoveries are made that inevitably alter the way we live. And these are the big ones that I’m talking about; the ones that spark our brains with sudden fits of imagination and perhaps even fear. Events like the discovery of fire, the ability to communicate … the creation of laws that builds up civilizations, and the weapons to tear them down.

These are the big ones. These are the moments in history that were so massive and world changing, even though we may not have known it in that moment. When fire was first used as a means to see at night and protect camps of humans, there was no way that they could knew the implications of what they found. They had no way of knowing that cooking with fire would release proteins in the meat they ate that would help in the growth of their brains.

When NASA announced the discovery of Kepler-452b, I knew at once that we were in the midst of a world changing moment. I instantly began to dream again of humans jetting across the stars in search of newer, and newer planets. We are explorers, after all … always trying to reach the furthest boundaries in our existence, and now our boundaries have expanded once more.

Sadly, not everyone shares my enthusiasm for this particular moment in human history. There’s far too much clutter in the world around us to occupy our minds, like celebrity new, politics, and the latest Kardashian update. At first I was bothered by that, not really understanding how people could be so quick to overlook something as big as Kepler-452b. Then I realized that they don’t see it like I do.

Before America was a “thing”–when people thought the ocean went on and on–there was one man who sought a quicker route to Asia … Christopher Columbus. After reaching what is most commonly referred to as the West Indies(believing it was in fact India), a man named Amerigo Vespucci came to realize that it wasn’t India at all, but an entirely “new” world, though it was already inhabited. Once more, that itch to expand and search out our boundaries crept up.

Before then, there was not much interest in going west from Europe and Africa. Nobody was willing to spend the necessary money to send ships west over an endless sea with no destination in mind. After Columbus, however, they had the destination they needed.

I believe this will happen again with the discovery of Kepler-452b.  Before the announcement of this new planet, the idea of humans traveling through space could only be a dream. Much like the “Old” world, we had no reason to wander aimlessly out into the unknown.

But now we have a destination … a point “B” for our preexisting point “A”. Hopefully we will see a new found invigoration in the research into deep space exploration. Privately owned companies dealing with aeronautics and specifically technology will undoubtedly see a peak in investments, helping to speed along the dream of setting foot on another planet.

Even if we could only match the speed of light with a shuttle(which is not a difficult thing to imagine) it would take us merely 1,400 years to reach Kepler-452b. That doesn’t sound so bad, considering its a whopping 5,865,696,000,000,000,000 miles away … almost six quintillion miles away. Driving 65 miles per hour in my Chevy Malibu, it would take me more than ten million years to drive to Kepler-452b, so fourteen hundred years isn’t that bad.

It would mean that we would have to send colony ships, or generation ships. Those that board the ship would never actually set foot on Kepler-452b, but their distant ancestors would. It may sound terribly sad, but you have to try to see the benefits of such a thing.

Only select colonists would board the ship … prime specimens of humanity, both physically and mentally. Each colonist would play a role on the ship and would make sure to pass their job on down the line. Pilots, geneticists, botanists, physicists, and so on and so on.

It would be like a futuristic ark, sailing off through the stars. And the first(that we know of) citizens of Kepler-452b would be their descendants. Each of them would have been raised to take up this task … it would be something for which their families would have been preparing.

And think of what those first colonists would be like … just imagine it. There would be no separate races, by that time … seventy generations of genetic mingling would see to that. And the only culture they would know would be that of the ship they came in on.

There would be peace from the start, and a shared goal that would pave the way towards prosperity. There wouldn’t be Americans, or Europeans, or Asians, or Africans … just humans–one shared identity. That in itself would make the journey worthwhile.

I more than likely won’t live to see the launch of such a ship. But perhaps our children will. Hopefully they will relish the idea that while they won’t be travelling through the stars, humanity certainly will be … giving us all another chance to carry on.

My Tweets
Join 4,306 other followers