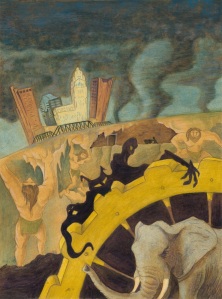 It gives me great pleasure to finally reveal the art that is the cover for my debut novel, Plod On, Sleepless Giant. Like most of us, I was always taught to “never judge a book by its cover” … unfortunately, that rule really doesn’t apply to actual books. Sadly, we almost always judge a book by its cover, which is a good thing for artists everywhere.

It is for that reason that I turned to one of my best friends in the whole world, Joe Reisinger, who also doubles for one of the best artists I know. I have known Joe for eighteen years now, and we have a very “cut to the chase” kind of relationship. There is no delicate manner in which we critique one another’s work(he also writes), it’s very honest and raw. Happily, I have nothing negative to say about his vision for my novel.

There was one request that Joe had when I told him that I was getting ready to post this cover reveal, and that was that he wanted to say a thing or two about the cover. Of course, I couldn’t refuse him … not after getting this file from him with the final piece. So with that, I introduce the artist/writer Joe Reisinger to the world of blogging

Thank you Mike, for allowing me the time and space to address your readers. As Mike was saying, we’ve been friends for nearly two decades and can be each others biggest proponents or harshest nay-sayers (I just blasted Mike about the design for the Launch Party fliers.) In this regard, I’m pleased to say, Plod on, Sleepless Giant is a great novel and a huge accomplishment. My only criticism, if you must call it that, is that the dynamics of the plot are hard to describe–it’s about two lovers, it’s about an elephant, it’s about the world ceasing… But really, tell me what Dostoevsky’s The Karamazov Brothers is about in thirty seconds. Please (a hundred pages in and no clue.)

So, Once upon a time Mike told me he had a dream of an elephant at the center of the earth, whose ceaseless moving turned the world. That was it. Now, many years later the story is complete, and I’ve drawn/painted enough elephants in the past three months that I may start dreaming about them, or tripping balls– what with the fumes of fixatives, varnish, and mineral spirits in my basement– much like the Winnie the Pooh movie.

’13 :The book is finally finished. I’m given the copy to edit and to come up with cover ideas. I spend the next several months editing. It’s pretty solid, so my margin notes generally ran something like, “Put a Semicolon here, again; semicolons connect independent clauses, whereas, commas connect dependent clauses; mess this up again, and I may have to murder you.

Sept ’14: Mike and I talked about the cover– to repeat myself, there are a lot of elements to this book and we wanted to incorporate many of the characters/themes/places as possible– and came up with a rough sketch. Originally, the cover was going to run both sides, with Temelephas and Columbus on the front cover, the storms and dark sillouhettes (the gloom) on the back with the giants (Firbolgs) and the minature (Minikins) on the the front and/or back.

I began on the drawing by focusing on Temelephas and the city, two of the most important elements, as well as the two easiest elements for which to gain photographic reference.

The other elements were not as easy to draw. For the muscly giants I was torn between asking a well-built coworker if he could do some half naked posing for me, or doing my best with googled images of Bodybuilders and Lou Ferrigno, I chose the later. However one day I was searching for reference of beefy half-naked men when the baby erupted telling me I was done for the night. I just closed the laptop with the browser still open. Thank God my wife didn’t open the laptop the next day or I may still be working on the cover while I battle two jobs and a divorce.

As time starts crunching and 2014 draws to an end, a dual sided cover seems too time consuming, and as I put it, “Mike, there’s too much to put on a one sided cover, too little to justify the full cover spread.”

Late Nov ’14: I’m proud that I finished the final drawing of the cover–in between working two jobs and having a wife and four kids, the youngest being 14 months. Mike casually asks, “You said that the drawing was the hard part, so realistically, when do you think you can get this done?” My response was that if everything went well. by the end of the year. Nothing ever goes well.

Several days later Mike tells me the publisher wants the cover by the end of the year. I laugh. He says the publisher is collaging photos of elephants for a backup plan. I cry.

Dec. ’14: The technique I used is similar to one taught by C. F. Payne at CCAD, which uses a oils, painted in thin layers, with a retouch varnish, which makes it possible to pick out the oils with an eraser as if you were working in charcoal. However, the varnish I used “back in the day” is no longer available likely to it causing “cancer” or other ailments. Oils themselves are completely safe even though they contain heavy metals such as lead and cadmium, well at least I didn’t work with Asbestos gray. So I have to go all “mad scientist” trying out new sprays.

I work on the cover in between jobs, after work, sometimes at the job (which is great for your self esteem–when customers come in and tell you how good you are–as long doing some side work on the clock doesn’t get you fired.) I paint on Christmas, my Birthday, and New Years Eve (in chronological order.)

Jan 05, 2015: The cover is done and I let Mike peel the tape that mask the frame of the picture. I think my work is done. Let them deal with promotional material and type placement, I say, yet I can’t keep my mouth shut and my finger’s out of the pot.

I want to thank Joe , not only for this great piece of art that will always honor me for the simple fact that it adorns the cover of my first book, but also for his friendship and input.

I hope everyone loves the painting as much as I do, it certainly is a labor of love for Joe. Plod On, Sleepless Giant will be out on January 20th, and will be available over at amazon.com, barnesandnoble.com, and where ever else it is that we can make it available!

If anyone has any interest in connecting with Joe for a cover or anything (sense he is completely disconnected from the modern tech world—for the moment) feel free to contact me here, by leaving a comment below. I know Joe is looking forward to more work … as long as it doesn’t involve any elephants.

My Tweets
Join 4,308 other subscribers